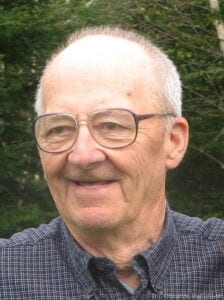 William “Bill” Latty, 90, of Rangeley passed away peacefully at home surrounded by family Oct. 13, 2020. He was born in Lac Megantic, Quebec to Walter and Beatrice Latty April 19, 1930.

As a new husband and father, Bill moved his growing family to Rangeley in 1964, knowing he could build a safe and secure future. Bill worked as a mechanic at D.C. Morton & Sons; he walked across the street each day to a job he was proud of until retiring at age 63.

Bill quickly made friends, some of whom became as close as family. He always enjoyed spending time with his buddies going four wheeling, and whatever mischief they could find. Bill loved and valued his ever growing family and many good friends.

He was predeceased by one sister; two brothers; and a very special family friend, Leland Clark.

Bill will rest in peace at Evergreen Cemetery in Rangeley. Services will be private.

Donations may be made in Bill’s memory to the Rangeley Region Guide & Sportsman Assoc., Junior Guides program, PO Box 244 Rangeley, ME 04970. A kind word may be left in his Book of Memories at www.wilesrc.com.

The post William “Bill” Latty first appeared on The Irregular.