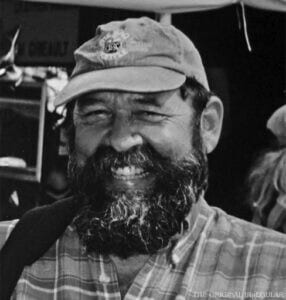 Bill was born April 20, 1939 in Franklin, Mass. to William Andrew Jones and Ruth Pearson Jones. He was their only child.

Allured by the natural beauty and the ample fishing and game culture, his family moved to Eustis, Maine in 1949. The Jones family ran Jones General Store where, “If we ain’t got it, you don’t need it!”

Bill graduated Stratton School and subsequently earned a science degree at what is now UMaine Farmington. He also joined the U.S. Army reserves and was discharged with honors after seven years serving his country.

Although Bill grew up hunting, fishing and skiing in the northwestern woods of Franklin County, Sugarloaf Mountain became his life’s focus. Bill was always willing to try something new to enhance the mountain experience while having a bit of fun along the way. In ‘54, he was the skinny 15-year-old flipping burgers at Leo Scribner’s Schuss Cafe in the Base Lodge. In ‘61 he and Brud Folger built the Sugarloaf Sauna. The building remains today as Hug’s Restaurant.

Due in part to Bill’s constant ideas and effort, Sugarloaf evolved from local schuss-spot to hosting the World Cup in 1971. Shortly after, while working at Peter Webber’s ski shop in the Valley Crossing, he and Norton “Icky” Webber created The Bag, a popular bar and restaurant in Carrabassett Valley. Some say the local boys were permitted a key to the backdoor on Sundays (if you believe the rumors), as beer stores were closed due to Blue Laws.

He was a member of The Bad Actors, a theatrical troupe with great popularity in the area. In a culmination of various staged antics, Bill would lead a hearty rendition of The Old Sow Song as a company finale. His musical talent would later shine touring with the late Jud Strunk, beloved Maine comedian and musician, where Bill sang and played string bass.

Outdoor pursuits played a counterpart to Bill’s business and entertainment avocations. He was a Maine Guide, often counseling and cooking for Gardner DeFoe’s Wilderness Waterways, a backcountry canoeing and fly fishing outfit, where his cuisine in the woods rivaled his restaurant offerings.

He married Rosamond Brown, of Bangor, in 1976. They had two sons, William Jones and Andrew Jones.

Family life was casting practice, weeding infinite rows of corn, skiing, ukulele, camping in the back pasture, nightly dinners with Uncle Al Scheeren, long and boat-centric summers in South Brooksville, road trips to Canada in the VW bus, sailing in the Virgin Islands with Parker Hall, Jazz-Fest, fresh picked asparagus, and shoveling paths for the dogs in four feet of snow.

The marriage ended in divorce in 2000, but Bill continued to own and cook at The Bag until 2015.

He is survived by his sons, William of South Portland and Andrew of Stratton, Maine.

There will be a memorial service at a later date when gathering guidelines are less restrictive.

The post William ‘Bill’ Jones first appeared on The Irregular.