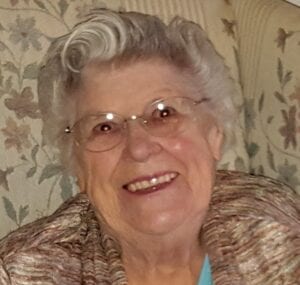 KINGFIELD — Naida Woodcock, 90, of Kingfield passed away peacefully at her home Nov. 29, 2020, with her family at her side.

Naida was born Nov. 24, 1930 in Waterville, to Norman and Delia (Rodgers) Loucks. She lived in Rome, Maine up until the age of 10 when the family moved to Kingfield after the death of her father. She attended schools in Kingfield and graduated from Kingfield High school in 1949. She married Harold Woodcock Nov. 15, 1952 and the couple raised three children: Candice, Yvonne and Bentley.

She worked from home while the children were young doing repairs to ski clothing thru Harvey Boynton’s Ski Shop and by making cakes to celebrate everything from birthdays to weddings. When the children were older she cooked for the school lunch program at Mt. Abram High School.

Naida had many hobbies and was active in her community. She belonged to the Kingfield United Methodist Church, was a leader of the Merry Makers 4-H club, a member of the Kingfield Fireman’s Auxiliary, American Legion Auxiliary, Stitchers in the Snow quilt club, Somerset Chapter of the Order of the Eastern Star, and the local chapter of the Red Hats Society which disbanded and became a group they called “Dames.”

She was predeceased by her husband Harold; her parents Norman and Delia; and her sisters, Roberta and Joyce.

A Celebration of Life will be held at a later date.

Donations may be made in her memory to the Kingfield United Methodist Church, PO Box 342, Kingfield, ME 04947. A kind word may be left in her Book of Memories at www.wilesrc.com.

The post Naida Woodcock first appeared on The Irregular.